In BioMethanol, four institutions are involved. Further, the Abwasserzweckverband Staufener Bucht and the Badenova AG & Co. KG are engaged as associated partners. 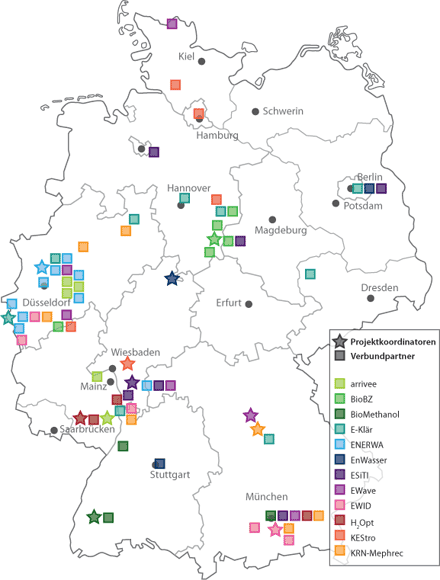 Commonly, the elimination of the organic carbon load in municipal or industrial waste water is achieved by O2-respiring microorganisms in an activated sludge process. To fully degrade the organic carbon fraction to CO2 the wastewater must be actively aerated, which requires a considerable amount of electrical energy. At present, only part of the waste water’s chemical energy content is recovered in the subsequent anaerobic digestion of the sewage sludge, which yields methane-rich biogas. As an alternative technology for a more energy efficient waste water treatment microbial fuel cells are currently being developed. In microbial fuel cells, so-called exoelectrogenic bacteria use the anode of a fuel cell as terminal electron acceptor instead of oxygen simultaneously producing CO2 and protons from organic carbon. At the cathode, oxygen reduction completes the electron cycle. This way, electricity can be directly generated from the energy-rich organic carbon fraction of the waste water while at the same time the energy-intensive aeration can be circumvented. If the cathode is placed in an oxygen-free environment protons instead of oxygen are reduced at the cathode and hydrogen gas is generated. Thereto an additional small voltage has to be applied between the anode and cathode of the fuel cell. This process is called microbial electrolysis. Compared to conventional electrolysis this process requires less electricity, since part of the required electrical energy is supplied from the bacterial degradation of the waste water at the anode. Scope of this interdisciplinary and collaborative project is to produce methanol from waste water. Methanol is considered to be a renewable energy carrier that can easily be stored and transported. Unlike the conventional methanol synthesis process based on fossil fuel resources the proposed process is efficient and sustainable: carbon dioxide (CO2) and hydrogen (H2) are produced from municipal or industrial waste water in a microbial electrolysis cell and further converted into methanol by a downstream heterogeneous catalysis process.

Work package 2: Optimizing the microbial consortium of the electrolysis cell

Overall aim of this work package is the isolation of microorganisms that are adapted to the operational conditions of the microbial electrolysis cell. Thereto, exoelectrogenic microorganisms will be isolated from municipal and industrial waste waters and characterized. Pure cultures as well as mixed consortia will be grown as biofilms on anodes, characterized with respect to their bioelectrochemical performance and compared to known model organisms. Finally, the long-term stability of the pre-grown biofilms when operated with real waste waters will be investigated.

Aim of this work package is the production of methanol from H2 and CO2 by a heterogeneous catalysis process.  Thereto, new catalysts will be developed and optimized for the operation with the gas mixture produced in the microbial electrolysis cell. This research will focus on the knowledge-based optimization of the robustness and lifetime of the catalysts and most importantly improving their activity at lower temperatures. The latter point is particularly important since due to thermodynamics a lower reaction temperature leads to a higher methanol yield.

Overall aim of this work package is the development of a laboratory scale system to demonstrate the feasibility of the concept. It will consist of an optimized microbial electrolysis cell stack which will be directly coupled to a laboratory scale methanol synthesis stage. This system will be operated and characterized under realistic conditions, using different waste waters. This will provide data required for the ecological and economic evaluation of the overall concept in work package 5.

The aim of this work package is the technological, ecological and economic evaluation of the overall concept "Sustainable methanol from waste water". Different variants for methanol production will be compared and the economic and ecological aspects of the most promising approach will be evaluated.